Yes, it’s true, I just found out my friend and coworker Jeff W. Barnes was awarded MVP for 2008. Way to go Jeff! I know you’ve worked hard and richly deserve it.

Read more about it at his blog:

Did someone say WCF???

During last week’s WPF class, several of my coworkers expressed an interest in using the 2008 edition to experiment with WPF. They were concerned installing the beta on their production box could damage their boxes, even though in theory part of the beauty of .Net is the ability to run multiple versions of the framework side by side.

To alleviate those fears, Microsoft has provided a Beta of 2008 already in a ready to run Virtual PC. First, you’ll need to have Microsoft Virtual PC 2007 installed on your box. If you don’t, you can grab a copy from

(Even though the instructions indicate it should work with VPC 2004 SP1 or Virtual Server, I haven’t tried it with them. Virtual Server should be fine, but I would highly suggest upgrading your VPC 2004 to 2007 if you haven’t done so already, there’s lots of nice new features that make it worth the effort.)

The download is in the form of 7 files, the first is an exe and the rest are rar files. Download all 7 to a folder and run the exe, and it will combine all 7 to create the virtual pc image.

Make sure to read all of the instructions on this page! The user ID and password to login to the virtual image, along with a link to the needed base image, are contained in the instructions!

Now you need the Orcas base image. If you read through the instructions you saw the link to the compressed file, right above the user id / password. Right click on the link and “Save As…” to the same folder where you saved the other items. Run it to uncompress the base image.

When you login, it tells you that the password expries today, and asks if you wish to change it. I’ve always just said no, and it seems to work fine, but you are welcome to change it if you want.

When you shut down the Virtual PC, you will be prompted first for why you are shuting down. This is a Windows Server 2003 prompt, I just select “Other (Planned) under the option and put an ‘x’ for the comment. Once you do the OK button will be enabled.

Next, Virtual PC prompts you, to see if you want to commit your changes or abandon them. If you select “Commit changes to the virtual hard disk”, any changes you made will be saved and ready for next time. If you choose “Delete undo disk changes”, everything you did during that session will be lost forever.

Since it’s just a virtual image, I usually pick commit, but if you have really hosed things up you might want to know about the Delete option.

All of the software I’ve mentioned here is free, so there’s no reason why you can’t run this at home, even if you don’t have an MSDN subscription. Be warned, although Microsoft hasn’t specified a date I would think the image will expire not long after the release of the full Visual Studio 2008 product.

Using the virtual image will allow you to experiment with WPF, as well as the new 2008 features in a safe, risk free environment.

Note: If you want to use Visual Studio 2005 to write WPF (as well as other .Net 3.0 projects), I have documented the bits you need to download in this post:

Head colds are nasty things. Yeah, I know folks like Scott Hanselman and Jeff Atwood say we shouldn’t talk much about ourselves, but I offer this as explanation for dropping off the face of the earth last week. A nasty head cold, followed by busy work week and my houses air conditioning dying in the middle of an Alabama triple digit heat wave… well something had to give.

But hey, odds are you’re not hear to offer your chicken soup recipe, but find out about WPF. So let’s kick this week off by starting a WPF project. Assuming you followed my instructions in my last post ( https://arcanecode.wordpress.com/2007/08/20/installing-the-wpf-bits/ ), you now have all the bits installed. Open Visual Studio 2005, and create a new project. 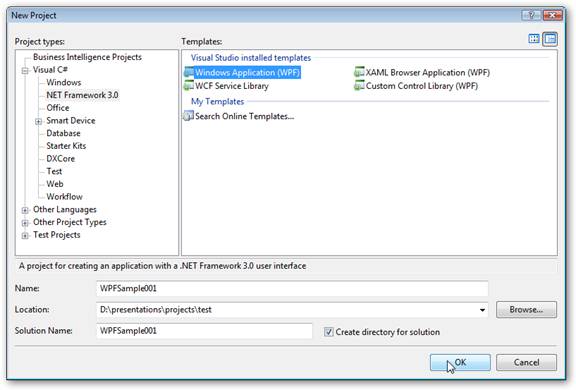 In your “New Project” window, navigate down to the “NET Framework 3.0” branch. In the templates area you see some new ones. One, WCF Service Library, is for creating Windows Communication Services projects and is outside the scope of this discussion.

The other three are WPF oriented projects. Windows Application (WPF) is for creating general windows applications using WPF. This is what you’ll probably use the most, and what we’ll pick for today’s demo. I named mine WPFSample001, as you can see above.

Before you click OK, let me just mention the other two. Custom Control Library (WPF) is analogus to it’s “old fashioned” WinForms counterpart. It lets you create a custom control comprised of WPF pieces for use in WPF Windows projects.

XAML Browser Application (WPF) is used to create a WPF App that will run inside a browser. Note this isn’t Silverlight. This is more like a Click Once deployment that opens the app inside the browser. MSDN (Sep 2007) had a good example of one you can see for yourself at http://ttpdownload.bl.uk/browserapp.xbap .

OK, that covers the various WPF project types. For today, we’ve decided on a standard WPF Windows Application, so click OK as you see in the screen above.

Let’s take a quick tour of what you see. Over on the left is the Toolbox. Under Common Controls, we see some with names look familiar. Button, CheckBox, Lable, etc. These are the WPF versions of the old Windows Forms controls. There are some new controls too, such as the DockPanel, the StackPanel, and a Grid which is unlike any Grid you’ve used in the past. We’ll get into these as time goes by.

Over on the right, in the Solution Explorer you see the Files that make our WPF project. App.xaml (and it’s corresponding App.xaml.cs) is the starting point for our Windows WPF app. Here you can respond to events like application starting and stopping, or you can blissfully ignore it.

The Window1.xaml is your main focus now, since it’s where you can do all your work. If you look at the center pane, you’ll notice it’s a bit different from traditional Windows Forms or even ASP.Net designer, in that it gives you the nice split screen. Changes in one are reflected in the other.

If you don’t like the split, you can modify it by either moving the mouse in the middle area and adjusting where the spit occurs, or manipulate it using the controls on the right side of the tab area:

Before I close out today, I want to mention that the designer tool under 2005 is not fully baked. You will see a lot of “whoops” screens appear. In addition, control placement is more like the ASP.Net experience than WinForms. As such, most folks I’ve seen so far prefer to type the XAML code directly in.

To start with I’ll be doing just that, typing in the XAML which will help me learn the behind the scenes syntax. Later I’ll shift to using the Expression Blend tool as the main XAML designer.

This is a good start, tomorrow we’ll pick up with creating a simple XAML app.

Some miscellaneous topics to cover for today. First, I had the need to copy several thousand files from one machine to another, about 6 gigs worth. Explorer? No thanks, to slow and unreliable. Fortunately I had recalled reading a post on Scott Hanselman’s blog just the other day on this topic. http://www.hanselman.com/blog/XCopyConsideredHarmfulRobocopyOrXXCopyOrSyncBack.aspx

Since the machine I was using to do the copying was Vista, I used RoboCopy. Worked like a champ. The bad part was I didn’t even know I already had this tool until I’d read Scott’s post. Always nice when you go hunting for a tool only to discover you’ve already got it and it’s ready to go.

On the subject of SOA, Redmond Magazine released an article on Microsoft’s SOA strategy. http://redmondmag.com/features/article.asp?editorialsid=756

It was a long article and interesting, although it seemed to have an anti-Microsoft tone. I picked up a subtle, and perhaps condescending, knocking of Microsoft for not falling into lockstep with other industry players like IBM. While I do agree Microsoft sometimes comes a little late to the party, I don’t think it has to jump on the party boat to be an effective player in the industry.

Windows Communication Foundation Guru Jeff Barnes is planning on some new WCF posts in the near future, so be sure to keep an eye on his site if you play in the WCF realm. http://jeffbarnes.net/portal/blogs/jeff_barnes/archive/2007/08/08/coming-soon-wcf-3-5-posting-blitz.aspx

Jeff’s also working on a WCF Site (http://jeffbarnes.net/portal/blogs/jeff_barnes/archive/2007/08/06/planning-a-wcf-community-site.aspx), another good reason to keep an eye on his blog.

Finally, Scott Hanselman has opened up a forum area on his site, some good info and discussions can be found here. http://www.hanselman.com/forum/