Update: A reader named John posted a link to a fix, see my post on May 17 (http://shrinkster.com/p2w) for full details. But keep reading this post, as you’ll need the info here to implement the fix. OK, thanks to a suggestion I saw on the Ubuntu forums, I found a workaround for the no mouse issue, of sorts. This won’t give you the mouse back, but it will let you use Ubuntu 7.04 using keyboard control.

First, let me take a second to explain what the issue is. There was a bug in the kernel code that affected many different distros of Linux. Apparently the kernel was not finding PS/2 style mice. Some work has been done and now most PS/2 style mice are now being found.

Except, sadly for the ones being emulated. Both VMWare and VirtualPC emulate a PS/2 style mouse, and are not getting found by the kernel. Remember, it doesn’t matter what type of mouse you have hooked up to the host box (I have two mice, a Logitech MediaPlay and Microsoft Travel mouse, both USB). It only matters what the virtual machine is telling the guest OS (Ubuntu), which is PS/2 style mouse.

OK, that explained let’s play with Ubuntu some. Fire up Virtual PC, then use the CD menu to either capture an ISO image or capture the CD Drive you have the Ubuntu Desktop disk in.

When the menu appears, select “Start Ubuntu in Safe Graphics Mode” by hitting the down arrow once and pressing Enter. If you fail to do this, you’ll get garbled graphics.

Once Ubuntu gets fully loaded, press the left ALT key plus F1 (Left ALT+F1, remember VPC takes over the right ALT). This should highlight the Applications menu. Press the right arrow twice to System, then down once to Preferences. Now press the right key once to get to Accessibility, then right again. Finally go down to Keyboard Accessibility and press ENTER.

When the Keyboard Accessibility Preferences window appears, you should already be on the “Enable keyboard accessibility features”. (You can tell you’re on it because of the little ‘dancing ants’ rectangle around it.) Just press the SPACE BAR to check this on, as you see below. 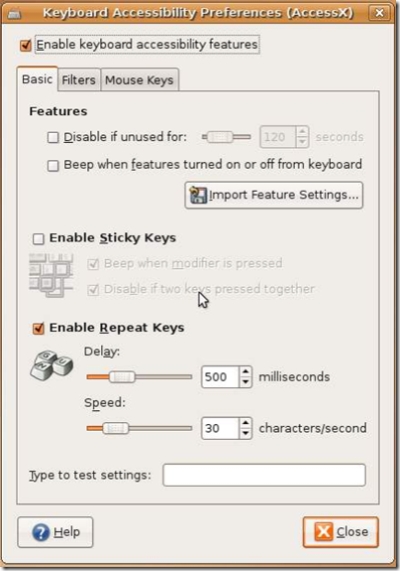 Now press the TAB key to get on the Basic tab. Press the RIGHT ARROW key twice to get the Mouse Keys highlighted.

Press TAB again to get to the “Enable Mouse Keys” and press the SPACE BAR to check it on. Now tab on down to the Close button and press ENTER.

What you just did was turn the numeric keypad into your mouse. When you press left (number 4 ), the mouse moves left, press the up arrow (number 8 ) mouse goes up, and so on. The angles work, pressing 7 (the home key on my keypad) moves up and to the left, for exampe. Finally, the number 5 key works as the mouse click.

One thing to be aware of, these only work with the numeric keys. It will not work with the standard arrow keys. Laptop owners with compact keyboards are in for a painful experience, you’ll have to hit NUMLOCK to activate the mouse, then turn Numlock off to be able to type letters again.

Well there you go, a way you can use Ubuntu 7.04 in Virtual PC 2007. Not the greatest solution, but might work for you until the kernel issue gets fixed.