Update: I’ve now determined how to get Ubuntu 6.10 working on VirtualPC 2007. If you are interested in the latest version, see my new post on February 26th, 2007 at https://arcanecode.wordpress.com/2007/02/26/installing-ubuntu-610-on-virtual-pc-2007-step-by-step/ or http://shrinkster.com/mff. Note there is still value in installing 6.06, as it’s the version of Ubuntu that will have long term support, and thus be the Linux of choice by many corporations. Also note that while the instructions below were written with 6.06 and VirtualPC 2004, the instructions are the same for 6.06 under Virtual PC 2007. So you’ve decided you’d like to try a Linux distribution, but don’t have a computer to dedicate to it. Further you’re understandably reluctant to mess around with your partitions and try and get dual booting to work. No problem, Virtual PC to the rescue.

First, you will need to obtain a copy of a Linux distribution. One of the most popular today is Ubuntu. Ubuntu uses the Gnome desktop for an “Apple like” feel. There’s a variant called Kbuntu which has a much more Windows like look and feel. If you are interested in Mono development (Mono is the open source implementation of the .Net Framework) be aware you will want to use a Gnone desktop, and thus Ubuntu, as my understanding is all of the Mono tools were designed for Gnome.

For this tutorial we’ll be using Ubuntu. To obtain your copy of Ubuntu, simply go to http://www.ubuntu.com , click on the downloads link, and select Ubuntu. I would recommend you use version 6.06, which is the long term supported version. I attempted to use the current version, 6.10, and had major issues with the graphics.

Be aware the image is around 650 Meg in size, so have a good high speed connection. If you are on a dial up, check your newsstands for various Linux magazines. Each month ever one of the Linux magazines comes with a DVD loaded with a variety of distos (Linux speak for distribution).

Once you’ve downloaded the ISO image, you have two choices. First you can simply burn to a CD, using your favorite CD burning software. Make sure you tell it you want to burn from an image, if you just write the ISO file you’ll have a disk with an ISO image, but it will not boot.

Your second choice, the one I’d suggest is to use the Microsoft Virtual CD drive. I blogged about it back on September 13th (https://arcanecode.wordpress.com/2006/09/13/virtualization/ ). Read this post to see how to use it, then jump back here.

Back? Cool. Launch the Virtual CD app, with a drive letter assigned to your Ubuntu image. For this tutorial I’ve mapped my Ubuntu to drive Z.

Now that you have Ubuntu ready, you need to go read my VirtualPC Step by Step post (https://arcanecode.wordpress.com/2006/09/20/virtual-pc-step-by-step/ ). Keep it handy as I will be referring to it frequently for this tutorial.

In Step 1 you are instructed to create a new machine, do so. I’ve named mine “Ubuntu 6.06”. In step 2, you are prompted for your OS. You will need to pick Other. In step 3, you are asked about Ram. Ubuntu will run OK under 256 megs, however if you have the available space I’d suggest upping it to 512, especially if you intend to get into doing some graphics or mono coding.

In step 4 you will want to create a new hard disk, and in step 5 confirm what you’ve selected. OK, now you are up to step 6, installing the OS, which is where this tutorial picks up.

Launch your new Ubuntu 6.06 VPC. (Click on it in the VPC and click Start). When it starts, click on CD, Use physical drive Z: in the menu. In a moment you’ll see a menu that looks like this:

Select the “Start Ubuntu in safe graphics mode” option. It’s very important you pick this option, if you take the default “Start or install Ubuntu” you will get garbled graphics under VPC.

OK, now you have watched the Ubuntu screen flash as it loads, now you should see a screen like this:

While it looks like it, be aware you have not installed Ubuntu. Instead, you are running in what is known as “Live Mode”. This is a feature that is common to most CD distributions of Linux. In Live Mode you can boot your computer and use a Linux distribution without having to install.

Installing is just what we want to do, and Live Mode makes it easy. By now you’ve probably noticed the big icon that says “Install”. Let’s double click this.

The first thing you are prompted for is the language you want to use. Select the language most comfortable to you, then click Forward.

Next you are asked for the city near where you live. You can select your city by either clicking on the map, or selecting from the list. After doing so you will want to set the time, just click on the Set Time… button to do so. 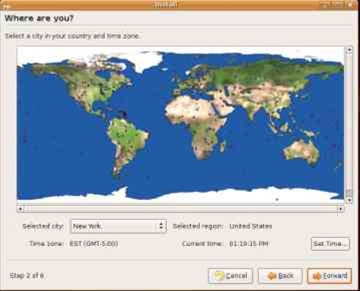 In step 3 we are prompted for the keyboard layout. Since my default is already selected, all I have to do is click Forward, otherwise you should pick your layout and click Forward. 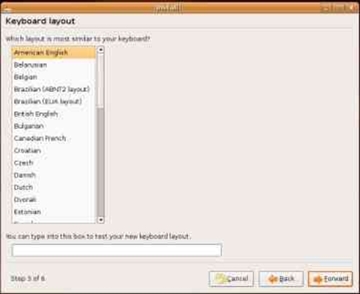 Now Ubuntu needs to get some personal information. Just your name, what you want your login name to be, and the name for your computer. Enter your own information here, then write them down! OK, now you can click Forward.

Getting close, now in step 5 we’re asked about the disk space. Your two options are to install to the entire partition, or manually edit. Since this is a virtual machine, we’ll just take the default of “Erase entire disk:IDE1 master (hda) 17.2 GB Virtual HD” and click Forward.

OK, we’ve finally reached the final step of our install wizard. Just assure yourself that your selections are correct, then click the Install button.

As Ubuntu installs you’ll be able to monitor it via a progress bar:

When the install is done, you are asked if you want to restart, or continue using the Live CD. Let’s pick Restart Now.

Now during the reboot I got to the Ubuntu logo screen, then the VPC just sort of stopped. I wound up clicking the red Cancel x to close the window, and picked turn off. I then returned to my VPC console and clicked Start to restart my Ubuntu machine.

Once Ubuntu is running, you are first prompted for your Username. Enter the user name you provided during the install and press enter when done. Then do the same with your password, pressing enter when you’re done. Ubuntu will crank and grind, then come up to the desktop, and you’re ready to go!

I’m not going to go into details on how to use Ubuntu, but I will point out a few things. Let’s take a quick look at the desktop. 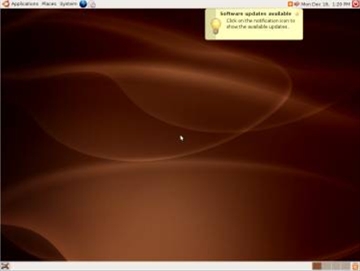 Starting in the upper left, you’ll see the menu:

The Applications menu is where your programs reside. Preinstalled is the Open Office suite, Gimp photo editor, and lots of neat games.

Places is sort of like My Computer, through it you can get to your personal folder, the network, CD / DVD drives, and more.

Through the System menu you can tweak your system settings, similar to Control Panel.

If it went away, just click on the orange icon you see on the screen. This is the notification icon, and will let you know of updates, system messages and more. Through the internet you can download the latest updates to Ubuntu. By the way, next to it you’ll see a little speaker icon, this is the Volume control.

Finally, you’re probably asking yourself how the heck you shutdown in Ubuntu. You can exit safely in one of two ways. First, on the upper right you probably noticed this red icon:

This is the shutdown icon. You can also select System, Quit from the System menu.

There you go, all the steps you need to get up and running with Ubuntu. Both it and Virtual PC are free, so you have no excuse to start experimenting with Ubuntu today.