As a consultant I travel a lot, and am usually on my small laptop with it’s 13 inch screen. A great size for travel, but a bit small on occasion. Doing PowerShell I often want to look things up, but it’s a pain having to jump back and forth between my editor and the help.

I have e-books on PowerShell which I can read on my various e-book devices, but as you might expect with a book they are not highly interactive. So the other day I ran across a solution for, of all things, my iPad.

It’s called iPowerShell, from the folks at Sapien. It was less than five dollars (US), and they have both iPad and iPhone / iPod Touch versions. It provides interactive access to the PowerShell help system, allowing you to quickly drill down into Cmdlets, Aliases, Providers, and more. 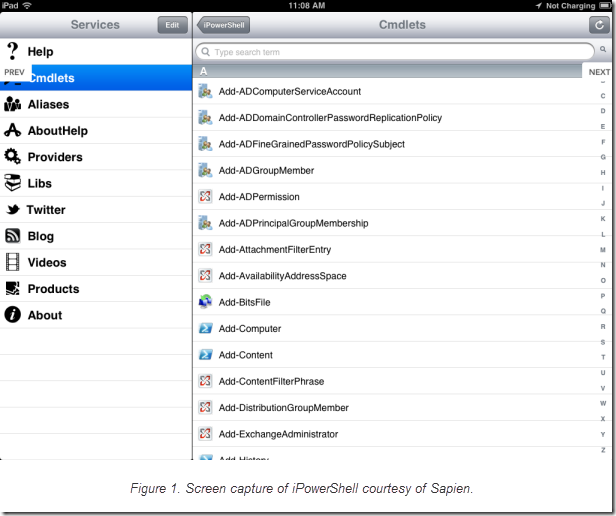 What I love most about iPowerShell is it’s extensibility. It uses the standard PowerShell help file format. That means you can write your own custom help files and use them not just in regular PowerShell but iPowerShell and other products that incorporate standard help.

This brings up some great possibilities. Many companies have generated their own set of custom modules and cmdlets. Often they have already created help files to go with them. Now those same help files can be used by simply importing them into iPowerShell.

Incidentally I found out about the tool because of my post on PowerShell Training. Over on the BIDN version of the post, a reader had posted a link to Windows PowerShell 2.0 TFM by Don Jones and Jeffery Hicks. This is an extremely comprehensive book, one that I immediately bought and have been reading ever since (hence explaining why I was up until 2 am this morning). You can get it in PDF format directly from Sapien at the link above, or in print format from Amazon. Highly recommended.

Sapien has some other cool, free community tools I plan to blog about in the near future, so stay tuned. In the meantime if you are both a PowerShell coder and iPod / iPhone / iPod Touch owner I think you’ll enjoy this inexpensive app.