It’s been a while since I talked about Visual Studio add-ins, so when I ran across KNOCKS Solutions “Knocks VS2005 Add-In”, I knew I’d found the perfect subject. Available at http://www.knocks-solutions.com/VS2005Addins.aspx?sm=idVS20052 , this rather full featured add-in offers many utilities.

First is a personal clipboard, that allows you to store and retrieve up to 9 different items. And they’re persistent, they will stay between VS sessions.

Next is a code snippets manager. This seems a bit redundant in light of VS 2005’s snippets, but I can see it being very useful during a presentation.

In addition to the code snippets is a Notes module. I’ve often wished for the ability to store quick notes to use in a presentation, so this is a handy module.

Up next is the one tool of theirs I have a beef with, the “Re-arrange code” tool. I like the idea of being able to re-arrange my code. Often I’m working on some public method, and realize I need a private helper method and, being in a hurry and lazy, will drop it right under the public method. Later I’ll move it around, which was why I was excited to see this tool.

Sadly, it has a really bad side affect, it strips out any regions you’ve put into your code, and it strips out any comments that might lie between methods (I often put a comment header right above my method, instead of in the method.) When Knocks rearranges your code all of that goes into the bit bucket, making the tool useless in all but (perhaps) the very earliest stages of coding. I would have thought it possible to add regions to the tool as well, and allow code rearranging within a region, between regions, or even to move regions around. Perhaps this will be addressed in the next version (he said, ever full of eternal hope).

There is a nifty zip tool that will zip your entire project, handy for quick backups. Also is a tool that embraces the concept of a favorites for projects. Another tool is one I wonder why no one did sooner, a keyword search on Google (or other configurable search engine, like MS Live). This is one I’ll be using often.

Also included is a simple “Data Object” generator. You bring it up and enter a few property names and types and Knocks will create the basic class for you. While I have seen more full featured code generators, I appreciate the basic simplicity of this one, not to mention the price (which I’ll get to shortly). 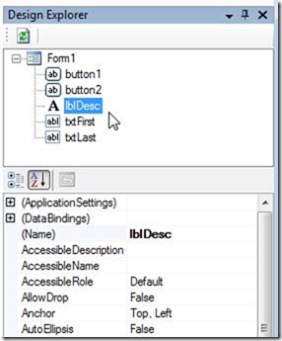 The final two tools I’ll mention are my favorites. First is a Design Explorer. This adds an explorer window (I put mine with the Solution Explorer area) to your display. In it are all the controls for your current form. Clicking on the control not only makes it the active control in the designer, but displays the properties in the lower half of the Design Explorer window.

The other tool is the Code Explorer. It displays a tree of your current code module. Double clicking on the code element will take you to it in the code window.

I’ve seen other add-ins with code windows, this one seems equal in functionality with many others similarly priced.

Oh, did I forget to mention the price? It’s free. Yes, FREE. Knocks has packed a lot of functionality into this add-in, and the fact it’s free makes it well worth the time to download and learn.