One of the most common errors I get asked about when using SQL Server Data Tools (SSDT) Database Projects is the error “This statement is not recognized in this context”. This is actually a pretty simple error to fix.

Envision this scenario. You have a simple table:

Then we have the script InsertSomeData.sql itself:

After inserting the code, or doing a build, you get this ugly error pop up in the error window:

So what happened? Well, when you went to insert the script you had these options in the dialog: 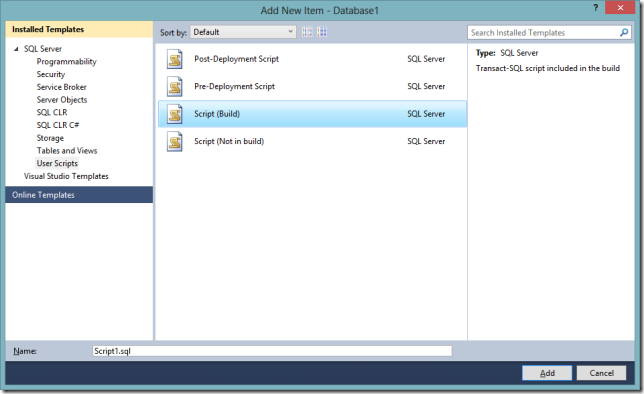 If you aren’t careful, you could accidentally pick the “Script (Build)” option (highlighted in blue). This option attempts to compile and run the code as DDL (Data Definition Language, the T-SQL syntax which creates tables, indexes, etc.) syntax. Things like Insert statements though are considered DML (Data Manipulation Language) code, and aren’t eligible to be compiled as part of the project. This is what generates the “This statement is not recognized in this context” error. You are essentially putting DML code where only DDL is allowed.

But don’t despair, this is extremely simple to fix. In SSDT, simply bring up the Properties dialog for the SQL script (click in the SQL script, then View, Properties in the menu). Pick the Build Action property, and change it to None. 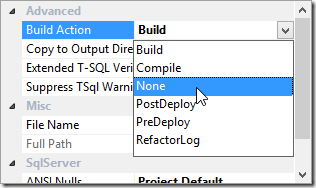 And that’s it, the error “SQL70001 This statement is not recognized in this context” should now vanish from your error list.