I very much dislike having to point out errors in other blogs publicly. I generally prefer to leave a comment or e-mail in hopes that the author will correct the error. Recently I found a blog post that at its root was incorrect. I left a comment explaining the error, in hopes the author would correct the issue. However, it’s now been one week and no changes or updates have been made. Further my post is still awaiting moderation while a comment made after mine has been approved.

The post in question is at a site called technixupdate, and begins with the assertion "Windows 7 taskbar does not allow to pin a shortcut or folder path directly to the taskbar, as only program executable can only pinned to the taskbar by default in Windows 7." (Note that’s an exact quote.) The author then goes through this rather convoluted technique of creating a fake executable file to accomplish the task. Unfortunately, the very opening statement is incorrect. Windows 7 taskbar does indeed allow you to pin shortcuts to it. Let’s look at a brief example to illustrate.

On my D drive I have a folder named Data. I’d like to create a shortcut to it on the taskbar. Let’s start by first opening up your "My Documents" folder. I could place the shortcut anywhere, but My Documents seems like a convenient place. Once there right-click then select New, Shortcut from the menu. In the dialog that appears simply type in Explorer “D:\data”. Note that you only need to use the quote marks around the drive and path if your folder names have a space in them. In the screenshot below you can see that I was able to safely omit the quotation marks since there are no spaces in my folder. 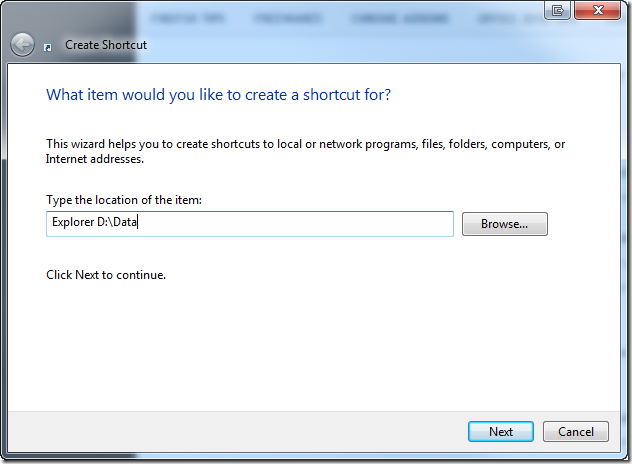 Once you’ve entered Explorer and your drive / folder you can click next. 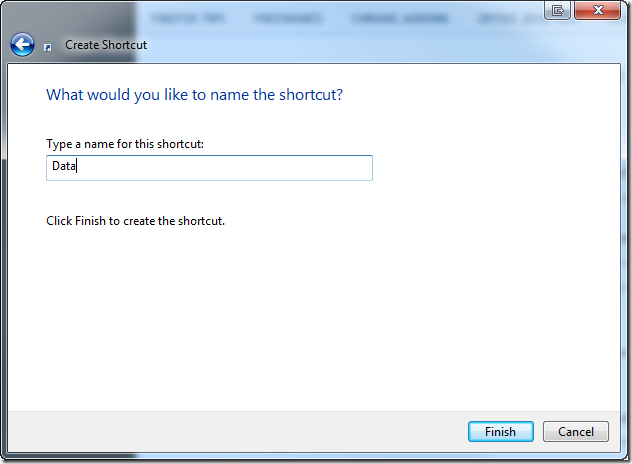 As you can see I replaced the default text of Explorer.EXE With something more meaningful, in this case the word Data. I simply click Finish to complete creating a shortcut. Now that we have a shortcut, it is a simple matter to pin it to the taskbar. Simply right click, then select "Pin to Taskbar”. 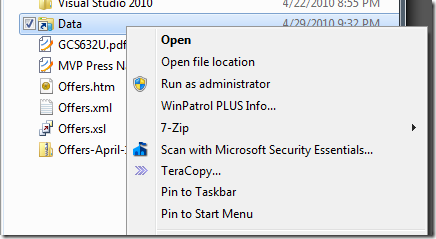 As you can see from the image below, I now have a shortcut to my Data folder on my Taskbar.

This technique will work with any shortcut you wish to create. I hope this will correct the record for those wishing to use this technique. Finally, even though his facts were a little off, I do want to give the author credit for blogging and trying to help out the community.