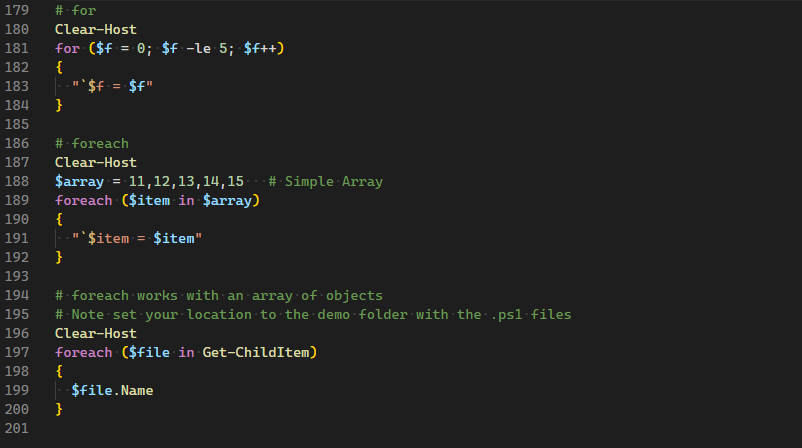 Continuing my series on PowerShell basics, in this installment we’ll talk bout looping in PowerShell. Looping is a mechanism for repeating a set of instructions multiple times, ending once a condition is met. Looping is also known as iterating, as in “iterating over an array”.

Loops continue until one of two things happen. In one type of loop, the loop continues until a certain condition is true. In the second type, the loop will iterate over a collection (also called an array) of objects until the entire collection has been gone through.

For all of the examples, we’ll display the code, then under it the result of our code. In this article I’ll be using PowerShell Core, 7.1.3, and VSCode. The examples should work in PowerShell 5.1 in the PowerShell IDE, although they’ve not been tested there.

To run a snippet of code highlight the lines you want to execute, then in VSCode press F8 or in the IDE F5. You can display the contents of an array variable (or any variable) by highlighting it and using F8/F5.

The while loop continues as long as a condition is true. Let’s take a look at an example.

In a while loop, you start with the keyword while, then pass in a condition. In this case, it will keep looping as long as $i is less than or equal to 5. Once $i is greater than 5, it will exit the loop.

So what happens if $i had been set to the value of 6, as in:

In this case, the while keyword checked the value at the start of the loop. Since $i was already greater than 5, the loop never executed. So when using a while loop, be sure to understand there may be conditions under which the while loop will never execute.

Before we see the next type of loop, I just want to mention unary operators. In the previous section you saw $i = $i + 1. Obviously this increased the value of $i by one.

There is an alternative syntax, the unary operator. With the unary operator, you use ++ either before or after the variable, as in $i++ or ++$i, to increment it. You can also use -- to decrement the value by one.

So what is the difference between $i++ and ++$i? It has to do with when the value is incremented. Let’s look at this example.

In this case, when ++ follows a variable the value is returned, then the variable is incremented. As PowerShell evaluates the string, it replaces $i with the value of 1, prints out $i is 1, and then it increments the value $i to 2.

In the final statement it displays the result of the incremented value.

What if the ++ occurs before the variable?

With ++ before the variable, the value in $i is incremented first, then the result is returned. So when PowerShell evaluated $((++$i)) it incremented the value of $i by one, now making it 2, then returned it to the string.

We took this detour into unary operators because it’s very common to use an expression like $i++ within a loop to increment the value, as you’ll see in the remaining examples.

With the while loop, you saw that it was possible that it might not execute, if the while condition was already true. What if, though, you always wanted the loop to execute at least once?

That’s where do while comes into play.

This is a similar result to what we experienced with while. But, what if $i was already greater than 5, as in the next example.

Because the while check didn’t occur until the very end of the loop, we are guaranteed that it will execute the code within our do‘s script block at least once, and hence it printed $i = 33.

As an alternative to do while, there is do until. With do while it continues to loop as long as a condition is true.

Contrast this with do until, which keeps looping as long as the condition is not true.

In this case, once $i is greater than 5, the loop exits. There’s not much difference between do while and do until. It’s mostly a matter of how you like to think about your code.

Does it make more sense, or will it increase code readability, to write your code so that it keeps looping while a condition is true, or until it becomes true.

Another loop you can have fun with is the for loop. The for loop is ideal when you want to iterate over code a set number of times.

Finally we have an expression that we want to execute at the end of the loop. Here, we’ll use a unary operator to increase the value of $f by 1.

As you can see, the for is very similar to a while loop. If $f is already over 5 (in this example) the loop will not execute at all. Like while, it will keep looping as long as our condition is true.

The for is a little more compact than a while loop as you can include the increment option in the for command rather than having to include it in the script block.

By far, the foreach loop is the one I use more than any other. The foreach loop allows you to iterate over an array (or a collection of objects, which is really just an array).

With for each you create a place holder variable then pass in the name of the array. Here, take a look at this example.

In this case we looped over a simple array of integers, but foreach can also loop over something more complex like a collection of objects. In this next example we’ll use the Get-ChildItem cmdlet to get a list of files from the current directory. As it goes over each one it will copy that file object into our $file variable, then we can use it in the script block.

The script block is very simple, it just references the Name property of the $file object and displays it on the screen.

Which is perfectly valid code. I just wanted to show that if the only reason you needed the $myFiles variable was to hold information to iterate over, and you weren’t going to reference it again in your code, you could skip it and just use the cmdlet right in the foreach loop.

In my previous post I dove into the Code Formatting around PowerShell. In all my examples, I used a space between the loop keyword and parenthesis that enclosed the condition. In addition I put the opening squiggly brace on the next line.

Neither is necessary, this is perfect valid code:]

In this post, we looked at several ways to iterate over your code. This included several variations on while, as well as for and the useful foreach. Now you have several tools at your disposal when you need to run the same piece of code multiple times.

The demos in this course came from my Pluralsight course PowerShell 7 Quick Start for Developers on Linux, macOS and Windows, one of many PowerShell courses I have on Pluralsight. All of my courses are linked on my About Me page.

If you don’t have a Pluralsight subscription, just go to my list of courses on Pluralsight. At the top is a Try For Free button you can use to get a free 10 day subscription to Pluralsight, with which you can watch my courses, or any other course on the site.